So I believe I got a request from a Miss Alex about posting up pics of my new place, and I'm more than happy to oblige! Plus I don't have anything to talk about. Photos usually distract from that. 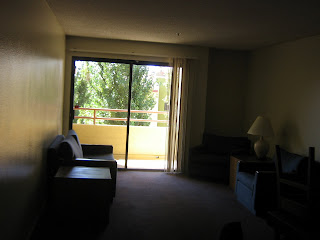 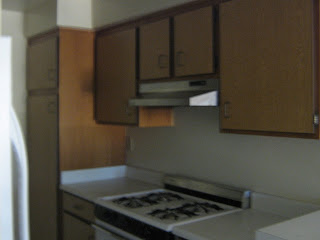 And here, ladies and gents, is my bedroom. It's pretty awesome. The blue Grizzly Bear poster and the huge ass byoP poster I got free from Criminal Records. The Pipettes poster and the Nicole Atkins poster were both looted from the venue after said concert. The dark pink poster with the face on it is actually from the New Young Pony Club album. I got the MIA bandana free, too...but it's a long story...and I got that red poster from this awesome ATL concert for Stomp And Stammer Magazine...The Black Lips, Deerhunter, Snowden, and the Selmanaires...all for 15.oo, and I won tickets for it on the radio. Sometimes Atlanta's pretty cool. Usually not. 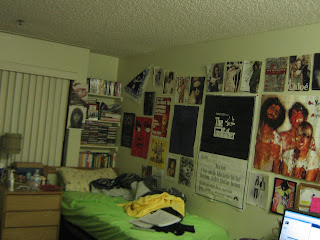 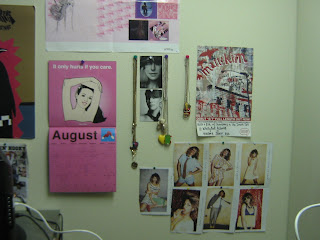 In case you can't tell, my calendar is by Donny Miller. In case you aren't familiar with his awesomeness, read up. You can also read the running dialogue between me and V. Those Feist pictures are actually postcards that my old boss from the radio station gave me. I had 4 but I gave two to my boyfriend since he likes B&W photos so much. It's an artist thing. The cool thing about that Matt & Kim poster is that my boyfriend actually got Kim to sign it for me as an early birthday present. We saw them when they came to the Whirlyball as a part of the Fuck Yeah Fest, and they were awesome. Matt even hugged me! Kim and I talked too, and she laughed at how excited I was. And as you can see, I've collected all the MIA for Marc Jacobs ads...mostly because I like MIA but I love Juergen Teller. 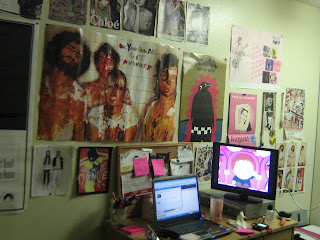 The pink Boris poster was free from an in-store at Criminal Records (they played ONE song and it lasted about 15 minutes!) and the Arctic Monkeys poster was from when they played at the Tabernacle about 2 years ago. It was fresh off the release of their latest album. And all the
8.5 x 11 glossies were pulled from Nylon or Missbehave. 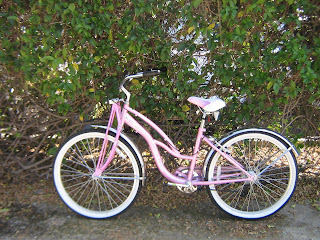 I ride it to school about 3 times a week, which saves a good bit of gas, but takes twice as long. Oh well. Every time I get tired riding it, I think to myself, I'm gonna be so skinny by the end of this year! And then I press on. Motivation, kids. Motivation.

Back Words: Cute, Fun, Get Your Voyeur On, I Like Stuff, Moi, New and Improved

its so cuteee! your walls look just like mine, no white space anywhere :) i'll post mine up later tonight or tomorrow. i got home at 430am and was forced to have an intelligent phone conversation at 830. so you can understand the non-functionality of my brain at the moment. is that even a word?

Damn girl, your room is soo much cuter than mine. Mine is lame and ugly and small. I need to do some serious redecorating and fast.

I love your bike!!! pure awesomeness...congrats on your new apt. have fun in cali for me=)

that bike is the girl version of the one pee wee herman had!