Last Night, She Said, Oh Baby I Feel So Down 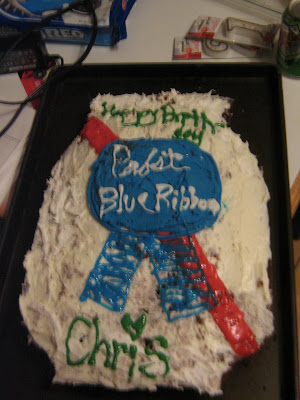 This is the cake we baked for Chris last night. It was my idea. In case you can't tell, it's in the shape of a can of PBR, the grossest beer ever, but Chris's favorite.

Last night was my friend Chris's 21st birthday. When I left him he was anywhere between beer number 11-13. This is the debauchery that went down, ATL style.

First we went to the bowling alley. By the time we got there Chris was already on beer 7-9. He's a pretty fast guy. Bowling shoes were 8.00 to rent, but apparently you don't need them, because they don't really give a shit if you bowl in your regular sneaks. Yay! 16.00 saved!

After everyone ate cake and the bowling alley played all of their Lil Wayne songs, we headed out to this bar called The Local, which I very quickly got kicked out of. LAME. FAIL. But Chris and his friends were so cool, they all decided to leave since I couldn't stay. So then we stood in front of the bar while Chris did flaming shots and a crackhead gave me and this really nice girl Amanda some flowers.

Then we walked to Fellini's for some pizza around 1 am and that's when this dude named Pat showed up. We'd seen him at The Local when he was buying shots, but were all very surprised to see that he'd followed us to the pizza parlor. He sat with us and everyone got a little drunker. Chris was having trouble standing up.

That's when we all decided to go to the Clermont Lounge...the worst strip club in Atlanta. No, no, wait. Maybe the Pink Pony or Folly's might be worse...noooooo...the Clermont wins. You're looking at very old women who don't really give a shit about their bodies while they gyrate indescribably in front of you. It ain't pretty folks. Just ain't pretty.

Around 2 am, on the way back to the car, we stopped by Fuck Yesss, which as everyone knows, is the crazaziest indie dance party in the A. Christ, people. That shit was the physical definition of Hipster Runoff. It was ridic. I could've played Blackout on my Hipster Bingo card and won immediately.

After that we dipped out and I came home and collapsed in my bed. But it was a good night. I'm stoked to turn 21 in LA. Yay party!

haha, you know your night is going to involve a lot of hipsters when you start it off eating a Pabst Blue Ribbon cake. Sounds like such a fun night...I'm soo bored right now.

Ugh, me too! I didn't do anything today and now I'm too tired to do what was on my list of things to do like washing clothes, cleaning up, doing my nails, changing my contacts, etc.