What You've All Been Waiting For...

So I think the craze wildfires have finally died down. But rewind two days ago, and shit was up in arms. People were being evacuated over in Porter Ranch, which is only like 20 minutes from my apt, classes were canceled for the whole day, and apparently, you could see the fire from the building windows. But I didn't look, because I don't find natural disasters entertaining, obvi.

Tuesday, school was back in sesh, but in Sun Valley (where I volunteer at the elementary school), the lil ones had indoor recess and the air smelled like one big barbecue. Oh, and did I mention how the winds got up to 70 mph? Try riding your bike to that. It's um, hard.

But you don't care about my bicicular woes! You care about these uber serious, journalist style photos I took on Monday: 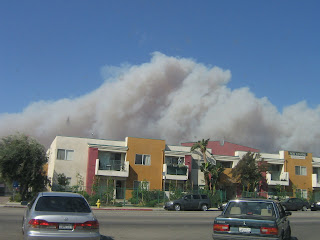 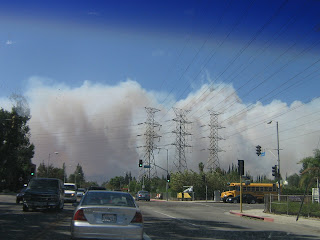 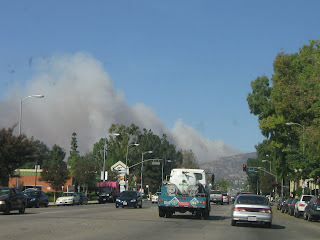 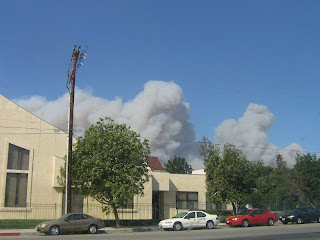 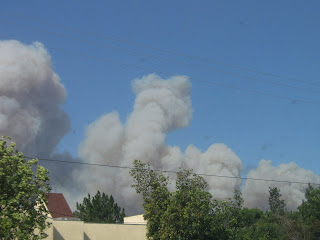 Okay, I confess. I took the above picture because the smoke cloud was shaped like a penis. Do you see it? I'm the only one apparently. When I tell people about it they simply reply, "You need to get laid." Ah.

The whole thing was pretty epic and kind of scary, espesh since I had to hear about this wildfire from a kid on a skateboard. I watched the news at work and the pictures on KTLA were intense as fuck. Some people were literally right next to the fire. I think the final stats are 2 people dead. Which could be worse, but is still very sad. Damn Santa Ana winds. All the lil refugee pets are at various shelters, which is good to hear because apparently people like to leave pets behind when they evacuate places. But um, all's well that ends well?

Back Words: fire, los angeles, places people are not meant to live, the valley sucks

ok, i know this is serious shit, but that smoke cloud soooo looks like a penis.

Dude, glad you're ok, though.

hey found you through missbehave- i like your posts on here better- oh and you crack me up.

Dude, people are assholes. I would SO not leave my cat behind in a fire ever. Fight or flight, whatevz, it's no excuse.

This is some CRAZY shit. I also really dig the penis cloud. Good eye!