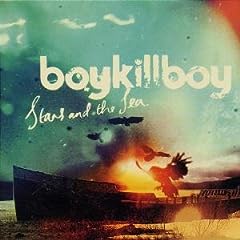 Alright, I love Boy Kill Boy. In fact, to say that I love them is an understatement. For a good deal of the crazy, memorable things that have happened in my life, Boy Kill Boy has been there. When I was driving to school on summer mornings, BKB was there. When I was crying my eyes out for no apparent reason, BKB was in my radio. We go way back, you see.

It's a miracle I didn't actually break Civilian from listening to it too much and constantly transporting it from my car to my bathroom radio to my bedroom radio to other people's car...etc. So naturally I was ecstatic when I heard they had a new album. I rushed to Criminal and had to special order it because it wasn't in-stock.

Well I got the call from Criminal saying that my album came into the store. I fucking hopped, skipped, and jumped over, bounding in all smiles and shitting rainbows. I went to the clerk, who looks just like Brian Posehn, and asked him for my CD. I had 20 dollars in my pocket, which seemed like enough.

That CD is 43 motherfucking dollars! And import-only! I barely pay that much money for the dresses at Urban! I couldn't even believe it when he told me. I just asked him to put it on hold a little longer.

Now I need some help. Should I just suck it up and buy the CD? I mean, there's no other way I'm going to be able to get it and I really, really, really want the album. Or should I just pass and tell Criminal to let it go. Sigh.

I'm more torn up than a prostitute's vadge on this one.

Can you maybe get it from somewhere else? Did you try amazon? You can usually get it for cheaper there if you get a used copy. But if you really really want the album and have no other way of getting it than I say fuck it, pay the money. It will probably be worth it in the long run.

Thanks for your help, girl. I tried Amazon, but I'd have to get it off Amazon UK, which means I'd have to pay almost the same amount in shipping/handling.